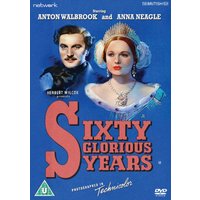 A lavish sequel to 1937’s celebrated film biography Victoria the Great, this sumptuous historical epic once again recounts the life and reign of Queen Victoria this time in glorious Technicolor. Given unprecedented access to the royal palaces, director Herbert Wilcox re-casts Anna Neagle as Victoria and Anton Walbrook as Prince Albert in a film which again met with worldwide acclaim. It is presented here in a brand-new remaster from the best available film elements, in its as-exhibited theatrical aspect ratio. Beginning in 1840 with her marriage to Prince Albert against a backdrop of discontent and the spectre of revolution throughout Europe, the film shows key events and relationships during Victoria’s reign, during which with the counsel of her ‘angel’, Albert the occasionally capricious queen won the deep affection of her people and redefined the role of the monarchy. Special Features: Limited edition, collectable booklet written by Laura Mayne Image Gallery Promotional Materials PDFs